I am a divorce lawyer now, but once I was a young father battling for custody of my two children.  I still can feel the worry and dread such a court case creates.  It seems to the parents that everything important to them in the universe is at stake.  Parents in such situations feel helpless because so much rides on the lawyers and the judge and jury.  No matter who "wins" or loses in a child custody case, both parents should at least leave the courthouse feeling they were treated fairly and that neither side had some sort of inside connection or political advantage.  Lawyers and judges who allow it to appear that political clout is influencing a case are damaging the integrity and stability of the justice system we all work and believe in.  I have spent many hours on this story and I have tried to be as accurate and fair as possible.  I will publish any responses from those involved if they feel their side of the story needs to be told differently than what I have written. Greg ... END_OF_DOCUMENT_TOKEN_TO_BE_REPLACED 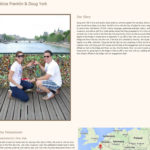 There is still time to buy a wedding gift for Judge Alicia Franklin before her April 4 wedding.  Whether you are motivated out of friendship or more practical purposes, Franklin made it very easy for you to buy her a gift on-line.  Until Tuesday, anyone on the planet was able to see her Honeymoon Pixie site and quickly order her gifts for her honeymoon.  Suddenly, after a very critical article was posted on the Republican blog Big Jolly about this unseemly situation, the links disappeared.  Then, the site required a password then within hours the public could again see the couple's gift wish list and buy them gifts.  Try clicking this link to possibly see it for yourself.  A Google search for "Alicia Franklin Doug York" pulls up this gift registry website and several others.  Here is part of what you were able to see until this week about the Franklin - York wedding: Judge Franklin and Mr. York are also registered on a variety of sites for gifts, including The Knot and ... END_OF_DOCUMENT_TOKEN_TO_BE_REPLACED

Reprinted from the October 23, 2014 Mongoose newsletter. Attorney Doug York is taking  cases in the court where his fiance, Judge Alicia Franklin, presides.  If you want a case out of the 311th, York is the attorney to hire.  Both York and Franklin should have enough sense and ethics to realize that York should simply not accept cases that are already pending in the 311th, especially those cases where Franklin has already heard something or where there is already a hearing set.  Franklin should not automatically recuse herself in cases where York allows himself to be hired knowing the case is in his wife-to-be's court. In Cause No. 2004-02532, Sheikh v Sheikh, a final divorce decree was entered in the 311th in March 2005.  The ex-wife's attorney, Scott Boyd requested a writ of execution on July 18, 2014 to try to collect on the 2005 divorce judgment.  In September 2014, a Fort Bend Constable seized a house belonging to the ex-husband worth about $152,000. The ex-husband hired a ... END_OF_DOCUMENT_TOKEN_TO_BE_REPLACED

Reprinted from the October 7, 2014 Mongoose newsletter. I filed a criminal complaint against Judge Alicia Franklin and she is not saying "I didn't do it."  Instead, she defends herself by saying,"Everybody does it."  A Houston Chronicle article of September 21 started this way:A prominent line of defense has emerged for a newly appointed family court judge accused this month of false billing when she was working as a court-appointed lawyer representing abused children: Everybody does it. District Court Judge Alicia Franklin, the subject of a criminal complaint alleging she broke the law by billing for more than 24 hours of work in a single day as a court-appointed lawyer in Child Protective Services cases, has explained the high hours by saying she was billing for work done by associates and support staff.    Click here to read the entire article, which also includes these quotes:    "It [the statute on payment of CPS ad litem fees] sure does imply that it has to be ... END_OF_DOCUMENT_TOKEN_TO_BE_REPLACED

Reprinted from the September 16, 2014 Mongoose newsletter.  The public relations flack Judge Franklin has hired (with either campaign funds or money she made on CPS cases), is not doing a very good job for her.  It does not really help Franklin to tell her to lay low and say nothing while the PR firm tells the press that my 100% provable facts are just a "political smear."  Here is what Franklin's spokesperson would be saying if I were Franklin's media and political advisor: First of all, it is a shame you are not looking into the hard work Judge Franklin is doing every day in her courtroom to provide justice to families and children.  She took on a court that was devastated by her predecessor's incompetence and she has already done a mountain of work to close out cases and correct errors Judge Pratt made.  I suggest you sit for a few hours in Judge Franklin's courtroom and decide for yourself what her dedication to justice and the law is. The issues Greg Enos has raised about ... END_OF_DOCUMENT_TOKEN_TO_BE_REPLACED

Reprinted from the September 16, 2014 Mongoose newsletter.  There is no doubt that in some instances, a lawyer who falsely bills the county for court appointed work can be convicted and sent to prison.                                           Last week, I was in an outlying county discussing this CPS billing scandal with some very good criminal attorneys.  They were all amazed by the huge fees that are awarded to CPS attorneys in Harris County and they all agreed that what Alicia Franklin had done when she was billing as a CPS attorney was clearly totally wrong.  Their debate was on the odds that Franklin could be convicted of a crime.  They noted that the CPS pay vouchers do not specifically say that the attorney submitting the voucher was stating "under penalty of perjury" that only she did the work billed ... END_OF_DOCUMENT_TOKEN_TO_BE_REPLACED

Reprinted from the September 16, 2014 Mongoose newsletter.  This is perhaps the most important development in the CPS billing scandal reported in this newsletter because the false billers were claiming that there was nothing wrong with the appointed attorney billing for work done by another lawyer. A wise probate judge in Austin who reads The Mongoose e-mailed me about an appellate case that holds exactly what I have been saying: a lawyer appointed by a judge as an ad litem cannot and should not bill for work done by other attorneys (except in unusual circumstances and then only after informing the court).  Let's see these "CPS appointment law firms" and mega-billers explain this: When a guardian ad litem is appointed, the trial court intends that appointed attorney to personally protect the minor's interests and to act as an officer of the court.  Accordingly, it is generally not anticipated or reasonable for a guardian ad litem to delegate his ad litem responsibilities to ... END_OF_DOCUMENT_TOKEN_TO_BE_REPLACED

This is a reprint from the September 9, 2014 Mongoose newsletter.  A future postulator writing a positio about Alicia Franklin will surely include as one of the two required miracles the amazing events of March 20, 2013, when Alicia Franklin billed Harris County, as well as the parents in a private amicus case, for the following all on one blessed day: 28.5 out-of-court hours in CPS cases 3.75 hours on a private amicus case 1 CPS trial appearance 4 non-trial CPS court appearances The hours billed for this one day total 32.25 hours plus Franklin claims to have been in court on CPS cases for one trial appearance and four other non-trial appearances on that same day.  There may well be other private cases that Franklin also billed for on that day. In CPS cases, ad litems bill per hour for "out of court work," but they are paid a flat rate per court appearance for trial or non-trial hearings.  Ad litems are paid a higher flat rate for trials than they are for non-trial court ... END_OF_DOCUMENT_TOKEN_TO_BE_REPLACED

This is a reprint from the September 9, 2014 Mongoose newsletter.  Click here to read the criminal complaint I have filed with the Harris County District Attorney against Judge Alicia Franklin.  The more I see of how Franklin billed the county in CPS cases and parents in her amicus cases, the less pity I feel for her.  I know that at some point my perfect batting record in taking down elected judges for criminal behavior will fall below 100%, but this does not feel like the time when I will strike out. I do not know that Franklin has committed a crime, but I have found 100% provable facts that need to be looked into by someone other than Republican District Attorney Devon Anderson, who bungled the Judge Pratt investigation and then made a "sweet heart" deal with Pratt that allowed her to avoid criminal prosecution.  Click here to read a motion filed by a District Attorney who wisely recused herself and asked for appointment of a prosecutor pro tem under Texas Code of Criminal ... END_OF_DOCUMENT_TOKEN_TO_BE_REPLACED

This is a reprint from the September 3, 2014 Mongoose newsletter.  Someone actually reads this little newsletter.  Sherri Cothrun complained that Alicia Franklin was improperly using the phrase,"Re-Elect Alicia Franklin" on her website, but the naive Chronicle editor thought Cothrun was just being picky and "hyper technical."  Franklin apparently saw no need to change her web site after their Monday meeting with the Houston Chronicle editorial board.                 However, after my newsletter that pointed this "re-elect versus keep" problem out was published last Thursday, Franklin quickly changed her website.       Franklin's problem is that it was simply not true and it was unethical for her to ask to be "re-elected" if she has never been elected in the first place.  I checked with the Commission on Judicial Conduct and confirmed that an appointed judge cannot use the phrase ... END_OF_DOCUMENT_TOKEN_TO_BE_REPLACED