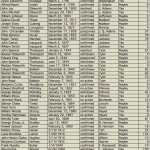 The always excellent daily blog www.electoral-vote.com tore apart the GOP claim of a "tradition" of lame duck presidents not submitted Supreme Court nominations in their last 18 months of office. Here are a few salient observations: - 47 of the 112 justices in Supreme Court history were submitted in the last 18 months of a presidential term. - Of those 47, 28 were confirmed, six were withdrawn, three declined the offer, two were rejected, and for eight no decision was made. - Just over half of those 47 were placed into nomination by a president whose lame duck status was official. - For official lame ducks, it is 11 confirmations, four withdrawals, three declines, one rejection, and five where no decision was made. - The average length of time for a decision to be made is 37 days; the longest a nominee has languished is 261 days. There are 342 days left in Barack Obama's term. Late-term appointments were vastly more common in the 19th century ... END_OF_DOCUMENT_TOKEN_TO_BE_REPLACED