The always excellent daily blog www.electoral-vote.com tore apart the GOP claim of a “tradition” of lame duck presidents not submitted Supreme Court nominations in their last 18 months of office. Here are a few salient observations:

– 47 of the 112 justices in Supreme Court history were submitted in the last 18 months of a presidential term.

– Of those 47, 28 were confirmed, six were withdrawn, three declined the offer, two were rejected, and for eight no decision was made.

– Just over half of those 47 were placed into nomination by a president whose lame duck status was official.

– For official lame ducks, it is 11 confirmations, four withdrawals, three declines, one rejection, and five where no decision was made.

– The average length of time for a decision to be made is 37 days; the longest a nominee has languished is 261 days. There are 342 days left in Barack Obama’s term.

Late-term appointments were vastly more common in the 19th century than they are today. In part, this is because justices live and serve longer now, so there is less turnover. And in part it is because the Court’s increased importance over time has caused more justices to strategically “time” their resignations and retirements; rarely does a seat come open in the third/fourth year of a president’s term unless a justice dies unexpectedly.

The upshot is that there is no “tradition” of lame duck presidents withholding their Supreme Court nominations in order to “give the voters a chance to weigh in.” The Court has business to do, the President has a role in making sure that business gets conducted, and no chief executive—including Ronald Reagan—has declined to fulfill their responsibilities because their time in office was short. 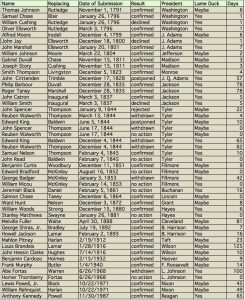