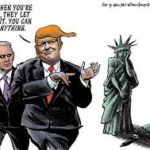 This article written by Sean Illing is from Vox, Jan. 18, 2017. Click here to read the entire article including the author's recent conversation with Mr. Zakaria. Twenty years ago, CNN’s Fareed Zakaria wrote an essay in Foreign Affairs titled “The Rise of Illiberal Democracy.” His thesis was that democracies around the world were surrendering to illiberal reforms, and that the strands holding the traditions of democracy and liberalism together were rapidly eroding. “From Peru to the Palestinian Authority, from Sierra Leone to Slovakia, from Pakistan to the Philippines,” he wrote, “we see the rise of a disturbing phenomenon in international life — illiberal democracy.” Zakaria’s piece made an important distinction between democracy and liberalism, constructs that are often conflated. Democracy is a process for choosing leaders; it’s about popular participation. To say that a state is democratic is to say little about how it is actually governed. Liberalism, by contrast, is about ... END_OF_DOCUMENT_TOKEN_TO_BE_REPLACED