This article written by Sean Illing is from Vox, Jan. 18, 2017. Click here to read the entire article including the author’s recent conversation with Mr. Zakaria. 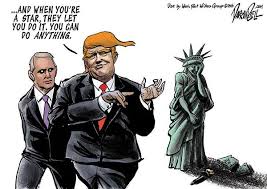 Twenty years ago, CNN’s Fareed Zakaria wrote an essay in Foreign Affairs titled “The Rise of Illiberal Democracy.” His thesis was that democracies around the world were surrendering to illiberal reforms, and that the strands holding the traditions of democracy and liberalism together were rapidly eroding.

“From Peru to the Palestinian Authority, from Sierra Leone to Slovakia, from Pakistan to the Philippines,” he wrote, “we see the rise of a disturbing phenomenon in international life — illiberal democracy.”

Zakaria’s piece made an important distinction between democracy and liberalism, constructs that are often conflated. Democracy is a process for choosing leaders; it’s about popular participation. To say that a state is democratic is to say little about how it is actually governed.

You might think of liberal democracy as democracy with legal buffers. It’s what you get when the Hellenic ideal of individual freedom is buttressed by the Roman devotion to rule of law, or what some today would call constitutionalism.

Wherever it springs up, illiberalism assumes a familiar form: more corruption, greater restrictions on assembly and speech, constraints on the press, retribution against political opponents, oppression of minorities. All of these things are bad, but they’re not necessarily undemocratic. Putin’s Russia is spangled with repressive and illiberal policies, and yet Putin is overwhelmingly popular among Russians. He is, like many near tyrants, a populist.

The illiberal trend Zakaria noted in 1997 has, if anything, accelerated. The Western world isn’t becoming less democratic, but it is becoming less liberal. Even more alarming, what was a trend is now an increasingly fixed reality.

The belief that the democratic experiment was destined to end in something like liberal democracy was just that: a belief. There is nothing inexorable about the logic of democracy; it is just as likely to culminate in tyranny as it is freedom.

As Zakaria put it, “Western liberal democracy might prove to be not the final destination on the democratic road, but just one of the many possible exits.”

As far back as Aristotle, the dangers of democracy were well understood. Aristotle considered direct democracy (rule by the many) every bit as unstable as rule by one or a few. Instead, he argued for what he called a “polity,” or a regime in which popular will is channeled through representative institutions and political decision-making is governed by laws enshrined in a constitution.

Aristotle’s concerns were shared by the American founders, who for similar reasons preferred a republic to a democracy. They recognized that unchecked democracy is majoritarianism, and that tyranny of the majority is tyranny all the same. For Aristotle and the founders, constitutional government was vital to the mediation of popular passions. It was how balance was maintained and the totalizing tendencies of oligarchy and democracy were stunted.

History has been kind to Aristotle and the founders. It turns out that democracy, absent a robust culture of constitutional norms and practices, is prone to all sorts of hideous excesses.

In a recent Washington Post column, Zakaria revisited his 1997 essay and asked a more pointed question: Is illiberalism now ascendant in the United States? His answer was less than hopeful: “We are now getting to see what American democracy looks like without any real buffers in the way of sheer populism and demagoguery.” (Spoiler alert: It looks a lot like it does everywhere else it emerges).

On Thursday, I spoke with Zakaria about what he saw twenty years ago and about what he sees today. I asked him why the distinction between democracy and liberalism is so crucial, and why illiberalism is a natural outgrowth of democracy. I also asked him if the election of Donald Trump speaks to a failure of the liberal democratic checks in our own system, and what that might mean for our political future.

Click here to read the rest of this excellent article.