This is a reprint from the September 3, 2014 Mongoose newsletter.  Someone actually reads this little newsletter.  Sherri Cothrun complained that Alicia Franklin was improperly using the phrase,”Re-Elect Alicia Franklin” on her website, but the naive Chronicle editor thought Cothrun was just being picky and “hyper technical.”  Franklin apparently saw no need to change her web site after their Monday meeting with the Houston Chronicle editorial board. 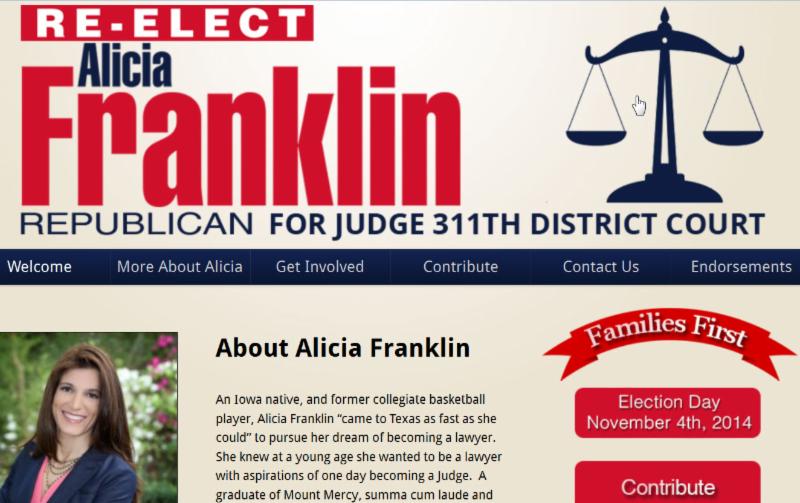 However, after my newsletter that pointed this “re-elect versus keep” problem out was published last Thursday, Franklin quickly changed her website.

Franklin’s problem is that it was simply not true and it was unethical for her to ask to be “re-elected” if she has never been elected in the first place.  I checked with the Commission on Judicial Conduct and confirmed that an appointed judge cannot use the phrase “re-elect” (they also cannot falsely claim to be a Rhodes Scholar or to have flown on the space shuttle either).  The Code of Judicial Conduct applies to JUDGE Franklin just as it does to all judicial candidates. Canon 5,(1)(ii), says,”a judge or judicial candidate shall not knowingly or recklessly misrepresent the identity, qualifications, present position, or other fact concerning the candidate…”

Anyone with political experience would have known that an appointed judge cannot ask voters to “re-elect” her, so this was not a mistake.  Franklin’s team has plenty of political experience.  However, the common thread you should see running through all of the articles in this newsletter is this: a smart person is making the sleazy choice and expecting to not get caught or called out on it.

A judge telling the truth to voters and knowing the rules and following them does not just involve a “hyper-technical” application of some rule.  A judge in family court has to apply “hyper-technical” rules of law to parents and parties and sometimes punish people who do not follow the rules.

The arrogance of the attitude that “the Republicans are going to sweep this election so no one is going to care what we do” is wrong and disgusting.  That was almost verbatim what I was told when I first broke the news to the Franklin camp of the distressing stories in this newsletter.

I have yet to hear anything like “Oh my gosh, if we screwed up we will get to the bottom of it, and apologize and make it right.”  When I called out Judge Meca Walker for accepting $20,000 in improper campaign contributions last Fall, she immediately recognized the error, apologized and returned the money.  That is what a person who cares about right and wrong does.