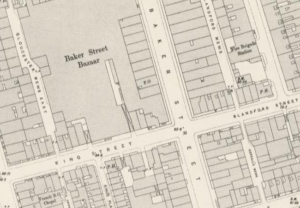 The business began as a horse bazaar and was owned, prior to his bankruptcy in 1832, by John Maberly, MP. The firm continued, and extended into carriages and other goods, notably ladies’ requirements, and furnishings. The upper floors of the building were occupied for a number of years by Madame Tussauds’ famous waxworks until they moved to their own building in 1884. This area was subsequently converted into function rooms (known as the Portland Rooms) which were used for balls, bazaars and similar activities. The Metropolitan Board of Works (London’s governing body at the time) required an additional exit to be constructed as a result of this change of use. 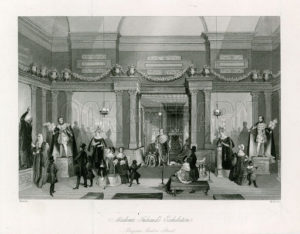 Originally the Bazaar featured horses and cattle and carriages but eventually it became focus on consumer goods and entertainment. An indoor ice skating rink, called the “Glaciarium” opened in 1842 at the Baker Street Bazaar with a backdrop of ski chalets and snow-capped mountains. The ‘ice’ was churned-up hogs’ lard and sulphur. On hot days it smelt of cheese. It closed in 1844. 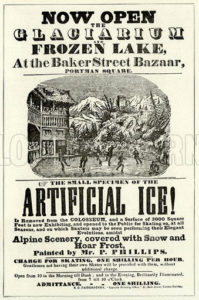 Thomas Charles Druce, born in Suffolk about 1794, was a co proprietor of the Baker Street Bazaar in London during the mid 1800s and he became a central figure in one of the most bizarre legal cases in London history.   Click here to read more about the Druce Portland Affair. 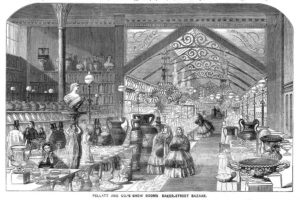 Charles Dickens described the Bazaar in 1879 as follows:

The Bazaar was used as a subsidiary hospital during the First World War. In later years, the Bazaar became a large furniture and upholstery store called Druce’s. Druce’s stood on the corner of Baker Street and Blandford Street until 1941 when the building was razed by the Luftwaffe.

The Baker Street Bazaar is not mentioned in any Sherlock Holmes stories as written by Mr. Doyle but it would have been the most well known business on Baker Street when Holmes and Watson lived there.