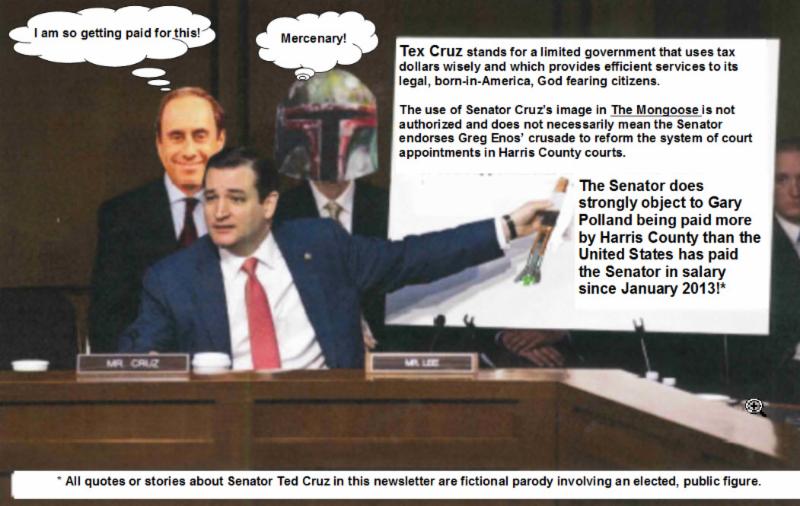 It was a dark, but not a stormy night. Toni and I were up late, enjoying a Dr. Who view-a-thon, and my phone was on vibrate, so I missed the text message from Senator Ted Cruz. 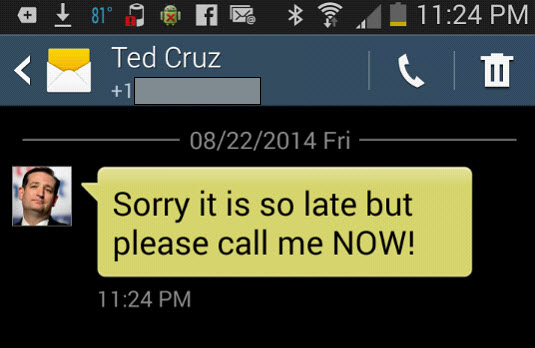 During commercials, I picked my phone up off the bedside table so I could Google to confirm the name of the 4th Dr. Who (Tom Baker) when the phone started vibrating.  It was Ted calling.  11:41 p.m. in Houston meant it was way past Teddy’s usual bed time in D.C.

“Enos, you up watching some Hubert Humphrey documentary?”the Senator growled.  I could hear the clink of ice in a glass and thought I heard a female giggle in the background.

“Ted, it’s late, I am kinda busy here,”I grumbled back.  Toni paused the DVR and shot me one of her typical “I ain’t putting up with late night calls from high ranking federal officials” looks.

“Look, Enos, you simply gotta keep me out of this Polland mess,” Senator Cruz said to me on the phone.  “The fine Republicans in Iowa and New Hampshire think tax dollars should be used sparingly and wisely and, hell, some even think abused children should get visited at home by the attorney appointed to represent them.”

“But nothing, you stop using my name and sure the hell stop using my picture in your Polland stories… you are killing me out here. Am I clear?” Cruz yelled.

“Sure, Ted, sure,” I replied.  Senator Cruz hung up without even an “adios.”  But, before I could set the phone back down, he sent me a silly old photo by text message of a leering Clarence Thomas shooting the bird at the camera at very close range.  I chuckled because I had sent that same photo to Ted the night before he argued his first case in the U.S. Supreme Court.  I never had told him how Justice Thomas, a liter of Bombay Blue Sapphire gin and I ended up back stage at a Motley Crue concert in Atlanta.  There are some tales even I must not share.

Okay, for real this time, on the day I sent out my last newsletter, I actually did get an e-mail from Senator Cruz’ office, asking me very politely not to use his image in stories associated with Gary Polland.

So, after this issue, I will leave Ted Cruz alone (for a while).  There are plenty of other recognizable Republicans I can ask to provide commentary on Mr. Polland. 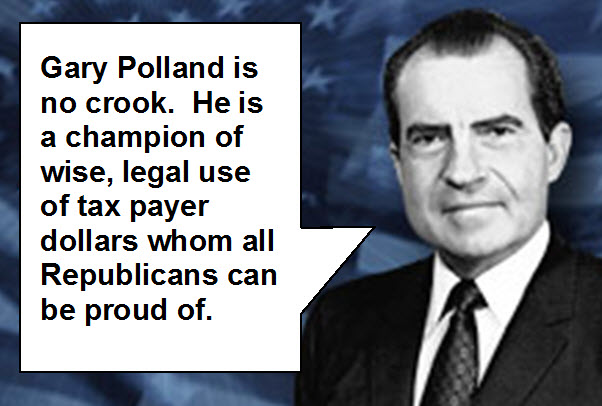