Our family law judges can start fund-raising in May if they are up for election in 2018. Lawyers can expect to be hit up from many of different directions for contributions during the next year and a half.

Democrats sense that the unpopularity and incompetence and policies of the Trump administration may change the usual voting patterns in Harris County, where Republicans usually win in non-presidential election years. It is easier to motivate voters with anger and fear than it is civic duty. It is well known that demographic changes in Harris County will mean that sooner or later all of our judges will be Democrats. The Legislature is considering eliminating straight ticket voting for trial judges, but it is not clear to me which side that will really help.

Judge Roy Moore is far ahead of the judicial pack in organization and he has a fund-raiser planned for Tuesday, May 16, 2017 at B&B Butchers, located at 1814 Washington Avenue.  Judge Moore has for months been sending out e-mails inviting lawyers to join his steering committee. His early emails included his complete list and noted which attorneys had not yet committed. Moore politely asked attorneys to suggest those who might want to join his team, but some took his emails as a thinly veiled reminder that he had a list of those who are not supporting him. Of course, Moore is such a good judge, that every lawyer should show their support of him, regardless of such reminders. I am an avowed liberal Democrat and I enthusiastically joined the Moore re-election team. 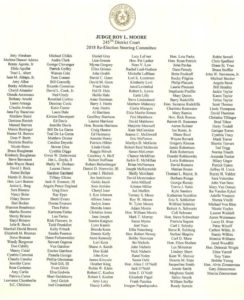 Judge Prine is hosting what looks to be a fun, fundraising event at Saint Arnold’s Brewery for June 1. I love beer as much as politics, so I plan to be there as a neutral and mostly sober reporter. 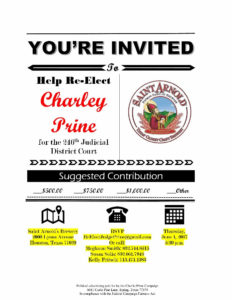 Judge David Farr and Judge Alicia Franklin-York have also sent out emails asking attorneys to join their re-election steering committees.  I received an invite from Judge Farr and promptly joined his team because I am a big fan.  For some reason, most lawyers I know got e-mails from Judge Franklin-York but, alas, I did not.  I will say this,  it looks to me like Judge Franklin-York is doing a good, efficient job as a judge.  I may never be a particular favorite in her court, but Judge Franklin-York seems fair and friendly and she has surrounded herself with a great staff, especially her associate judge and coordinator.

Judge Judy Warne is not going to seek re-election. Former Judge Alyssa Lemkuil has already announced that she will be running as a Republican for that seat.

If any incumbent judge does retire or is defeated, let’s hope he or she does not load up the January docket for her successor or that there are no office supplies waiting for their successor as has happened recently in Harris County.

I am checking with the rest of the family district judges in Harris County to see what their re-election plans are.  Democrats can smell opportunity in 2018 and I expect almost every incumbent to have opposition.  Trump is doing so badly, that it is not out of the question that the usual dynamics of a non-presidential election year might not apply in Harris County.  I am very liberal when it comes to national policy issues, but Harris County has some Republican family court judges who are as good as any judge can get and I wish they would go unopposed.  There are also a few who I wish would just retire and resign today.

The “Trump Effect” could change the usual voting patterns in Harris County next year.  In urban counties, it is thought that President Trump’s extreme unpopularity will shift many votes to Democratic candidates.  The first hint that this could in fact happen occurred last night in the special congressional election in Kansas.  This district has not elected a Democrat in over 20 years.  A special election was called because the Republican congressman resigned to become Trump’s CIA director.  This district only has one urban county, Sedgwick County, which includes Wichita.  In November 2016, Trump carried Sedgwick County by 18%.  In the special election last night, the Democratic candidate won Sedgwick County by one percent, 49% to 48%.  The Republican ended up  winning the entire district by 8% whereas Trump carried the district by 27% and the Republican congressman who resigned won by 31%.  This sort of extreme boost in Democratic votes in a usually very Republican place just five months after Trump destroyed Clinton there could be an omen of things to come, especially in other urban counties where more voters are non-white, educated and/or higher income (like Harris County).  If the vote tally in Harris County moves just 5% in the direction of Democrats in 2018, every Republican judge will almost certainly lose.  Of course, a lot can happen in 18 months.  Trump may not even be still in office by the time the judges we know so well and mostly like face the voters.

Here is what each Harris County family district judge has on hand in campaign funds as of January 2017: 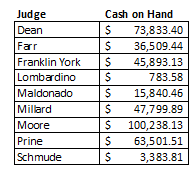 In Galveston County, the judges who hear family cases will be seeking re-election except for maybe County Court No. 2 Judge Barbara Roberts.  Former Judge Kerri Foley has announced plans to run for her seat if Roberts does indeed decide to retire.