A very small, select number of attorneys make hundreds of thousands of dollars each year because they are appointed by family and juvenile court judges to be amicus attorneys representing children in private custody cases where the parties can afford to pay very large fees.  The law that requires random appointment of lawyers for most positions (infamously called the “wheel”) specifically does not apply to amicus attorneys or discovery masters.  Each judge has the unfettered, and largely secret, ability to reward certain lawyers with these very lucrative appointments. There is no way to really track who gets these appointments, which judges make the appointments or how much the appointees are paid.  Public transparency and accountability has been sorely lacking for years.  Now the Harris County Family District Judges are requiring a new reporting form to bring transparency to this issue.  I applaud the judges, but more is needed.

In a case where wealthy parents are fighting over their children, some lawyer is probably going to get a lot of money serving as the amicus attorney.  In some courts, those appointed to be the amicus attorney for the children in such cases are very often friends and political supporters of the judge.  This is not true in many courts, and most judges look for the best lawyers to represent children. And, most lawyers who accept court appointments make very little money compared to the work they do on such cases.  Almost all lawyers who serve as amicus attorneys really do care about the children they represent.  I very rarely am asked to serve as an amicus attorney and it is usually by just one judge and the work I do is usually for free or close to it.  I know many lawyers who provide similar service because they just consider it part of the work we do within the justice system.  However, one dirty secret we all know about family law is that a select few attorneys, some who are often really good lawyers, make small fortunes off amicus appointments.  There are cases where the amicus attorneys are paid by court order over $100,000 in a single case.  Those super-lucrative cases tend to go to the same lawyers over and over again and those lawyers almost always turn out to be big political contributors to the judges who appoint them.  This does not happen in every court, but we all know it occurs and most of us know which judges and which lawyers are involved.

I have complained about this high dollar amicus racket since I started this newsletter.  Three years ago, I exposed the fact that a few politically connected attorneys were making hundreds of thousands of dollars from appointments on CPS cases and sometimes billing over 24 hours in a single day.  The result was the 2015 law that required random appointments in such cases and now things are much better.  Unfortunately, Texas Government Code Ch. 37 on random selection of attorneys ad litem does not apply to the appointment of amicus attorneys in private cases. At least, the fees for appointments on CPS cases are easy to review because they are paid by the county, which provides complete and searchable reports on fees for court appointed lawyers in CPS cases.

Now, the Harris County family judges say they are requiring a specific form to be used in all cases involving any payment for court appointments.  This is a great start, but as explained below, it is clear this first step is not near enough to clean up this particularly offensive problem.

Click this link to download in PDF the Harris County order that is now said to be required for all court appointees in family court:  FamilySupremeCourtReportAdLitemFees 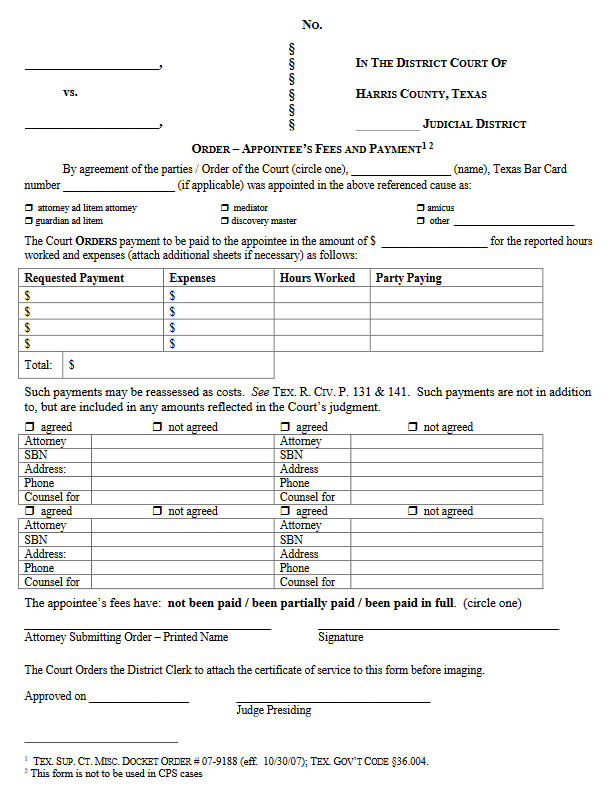 I sent our Family District Court Administrative Judge, David Farr, some questions, and, as usual, he quickly responded.  Here is what Judge Farr has to say about this form:

Judge Charley Prine, who is always a very helpful and reliable source of information, provided these insights in response to an e-mail inquiry from me:

First and most important I am responding for myself not the Family Court Judges or any other judge for that matter. The form requirement is not from the Supreme Court. It is to fulfill the legislative requirement listed in the Gov. Code. The Office of Court Administration in Austin issued a sample form but left it up to each Court to make and submit a form to their District Clerk that complied with the legislation. Our Family Courts along with the Civil Courts have been working with the District Clerk’s office to make forms that comply with the legislation. The purpose was to simplify the reporting for the attorneys in a way that would make collecting the information by the Clerk’s office efficient. The OCA form lists appointed positions many Courts around the State believe are not covered by the legislation. It also lists many positions that are rarely if ever appointed by our Family and Civil Courts. We wanted a simple, friendly form. Easy to understand and complete.

Long story short this is an Harris County Family Court specific form. I believe the Civil Courts have made their own form tailored to their general needs. The Family Court’s form is based on input from the judges and anyone who wanted to make comments including you. It has been a while but I believe I did take your concerns to our meeting and we tried to address them. We did not amend the local rules to include completing the form. This is a legislative mandate. If someone submits a form that complies with the legislation the judge should approve it and send it to the Clerk.

There is disagreement across the State about reporting mediation fees when the parties choose their own mediator. Until we get clarification from some higher source, our local general consensus is that we recommend filing even if the parties pick a mediator.  We have no rule when the documents are to be completed except the date stated in the legislation. The form is due before the final order may be signed.

We do not control when payments are made to mediators chosen by the parties. Several attorneys asked me to change the form to include a line to show if payment was not made.  The not paid line is not in the legislation. I personally think it is important for the public to know if the appointed person was not paid.  The focus always seems to be on who is making money. There needs to be recognition for those who ended up working for no compensation. You would be amazed at the number attorney amicus, ad litem, and mediators who get stiffed

Click here to look at these annual appointment fee reports for the entire state grouped by fiscal year.  If you select a specific report, you will download a huge Excel file.  You can then use “Find & Select” to search for a lawyer’s name or a court number to see fees that are reported.  The problem with these reports, as explained below, is that the vast majority of appointment fees are missed and not included in these reports.

In 2016, the Supreme Court rescinded its 2007 order, and so now we are just left with the mandate of Chapter 36 (do not be confused, there are currently two different Chapter 36’s in the Government Code).

The major problem with the reporting system under either the old Supreme Court order or now under Chapter 36 is that the clerks must make the reports and there is no requirement that judges, attorneys or appointees have to report their own appointments or fees.  In a huge place like Harris County, it is next to impossible for the district clerk employees to find every order making an appointment or awarding appointees fees.  Often, fee awards are buried in long temporary or final orders or divorce decrees.  So, the clerks often miss or cannot find orders on appointment fees and lawyers and others who get such fees are under no obligation to report their fees.

Now, this new Harris County form for family court appointments looks like a major improvement because it covers every type of appointment and is supposed to be entered at the end of every case.  However, there is no local rule which requires anyone to fill out and submit these form and there is not even a standing order.  For about two years, the family judges have been considering adopting new local rules.  At least one version of the suggested new local rules would require just this sort of form.

I thank our family judges for adopting this new fee appointment form and I hope they really make all those appointed in cases to fill out these forms.  However, I humbly suggest that the judges:

While this new form is a big improvement, it will not serve its purpose unless there is a rule or order that requires attorneys and others appointed on cases to actually fill out and submit the forms.  The judges must  educate the bar and be tough on those who fail to turn in these forms.

Look for Part Two of this article, which provides a disturbing example of big fees for a court appointment that were not reported under the prior Supreme Court order.